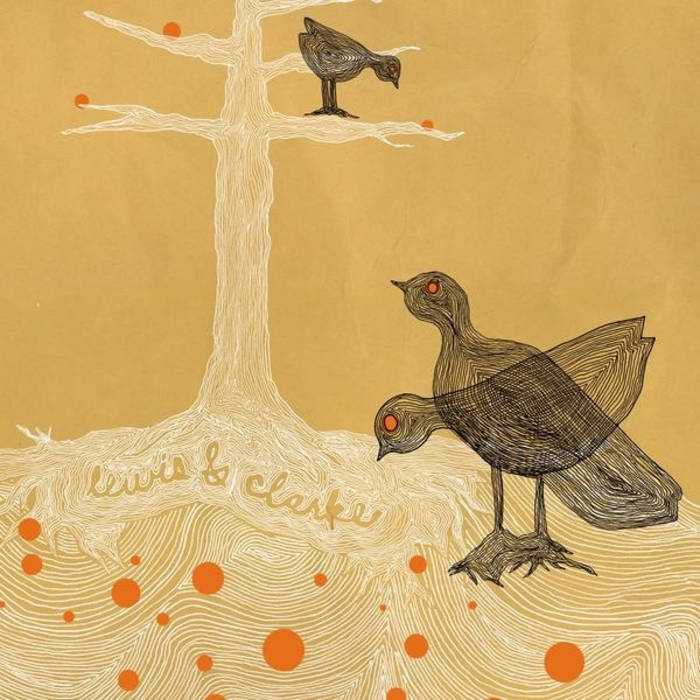 Recording 'Bare Bones and Branches' was no romantic Thoreau affair. It was necessity. I had just returned from touring solo and I was in between residences, living in my van and sometimes crashing at my friend's cabin in Northeast Pennsylvania. I had recorded some of the more minimal songs on 4-Track and Keats Rickard offered to engineer the core of the album, we just needed the space. The cabin was perfect, there was a wood stove for heat and plenty of peace and quiet. The weekend-long session felt more like a spiritual retreat from the heaviness we all were experiencing. I had a broken foot from a skateboarding injury, and I was adjusting to life back in PA after touring and ending a long relationship. One of my bandmates was suffering the loss of his father while battling a heroin addiction. We were also joined by Brother Moses Nathan, fresh out of a Russian Orthodox monastary on the west coast. He stoked both the fire and the philosophical discussions well into the night. Our workshop became a convergence of slightly misdirected emotional experiences where the songs became our therapy. It was as if completing the album would bring ultimate peace, or answers to cosmic riddles. It didn't. We all know that's only possible from the inside-out. However, it did bring us closer to something we were longing for. I dubbed more tracks at Dan's House over the next few months, adding keys, lapsteel, various textures. Those sessions were magic. The LP was released in Europe in 2003 on the Delboy imprint. Summersteps issued it in 2005 with alternate artwork, tracks and takes. Here it is, all these years later, as complete as I could imagine. It's a nice glance in the rear-view mirror, where some roads were smooth and scenic, others with burnt bridges and smoldering two-lane blacktop. Those roads got us here, and there's nowhere I'd rather be.

"Rogai always finds a quiet place for solace, capturing the smallness of everyday despair with a laid-back balance of precision, warmth, and regret."
- Alternative Press

"Lewis & Clarke has carved out its own niche thanks to the lush arrangements of its debut, 2005's "Bare Bones and Branches."
- Billboard

"Bare Bones and Branches is moody and careful, resigned and gorgeous. It’s pop at half speed, or it’s country noir, it’s new folk, or maybe we’re calling it slo-core, I’m not sure, but it’s going to drown us in a sort of delicate, well-read, mellow flood."
-Alarm Press

"This is the sound of the leaves falling, the sight of rolling hills revealed through a lattice-work of barren branches, the scent of woodsmoke, moss on the northern side of a nearly-naked tree...a sincerely brilliant piece of work...something unique, equal parts alt-country and chamber folk, sophisticated yet rustic."
-Crown Dozen

"Bare Bones and Branches is a pure music experience that whispers half-remembered truths to the soul, as Rogai easily soars above so-called "acid folk"/"freak folk" conventions by exhibiting amazing clarity and a sense of spaciousness in his songs...striking in its authenticity and ability to convey empathy and even inspiration. It is gentle and wild, an abundant feast of simple fare that nourishes the heart."
- The Morning Call

"A shining example of the fact that there is much uncharted territory to explore in this field of music, often-decried of all sounding the same. “Bare Bones and Branches” is a blast of fresh air, just like Gastr Del Soul was when I first heard them, just like Richard Buckner was, hell, like Grateful Dead was when I dropped my pre-existing resistance and listened to American Beauty for the first time with open ears"
- Outside Left

"Soft guitars and infectious melodies drew me into a trance when this album was playing. It's pure, charming, heartfelt acoustic folk that is soothing from beginning to end."
- Impact Press

"Lewis & Clarke, or Lou Rogai to be more exact, treads the territory of Papa M and Iron & Wine very well, and to be on par with such talent should be a hint to the quality found on this album....It’s a well-trod genre, but with acts like Lewis & Clarke still surprising us with such simple, melodic insights, maybe we should all just make room for one more."
- Exclaim

"(Bare Bones and Branches) is time-friendly, interpretively communicative and complete. It's the little black dress of music when the Stones flash a few too many sequins. It's the violet '69 Jaguar convertible in the wheat field: honest, cute, and terribly desirable."
-Lumino

"(Bare Bones and Branches) shines an intelligent revelatory light into the heart of life and love."
-Detroit Metro Times

"This group is spot-on...meandering melodies on a spool of reflective vocal lines, and sometimes unorthodox song structures... like an up-tempo visit to Scarborough Fair."
- Rockpile

"The best songs on Bare Bones and Branches recall the Stones of Dead Flowers....Or maybe the fagged-out Pavement of Wowee Zowee."
-indieworkshop.com

"A worthy addition to the folk music map. The songs are stretched to their fullest extents, occasionally meandering through long instrumentals as if to make sure nothing was missed along the way... Bare Bones And Branches rarely strays."
- Coke Machine Glow

"Highly melodic, richly arranged, and extremely compact - an artistic statement nearly as impressive as it is cohesive."
- Delusions of Adequacy